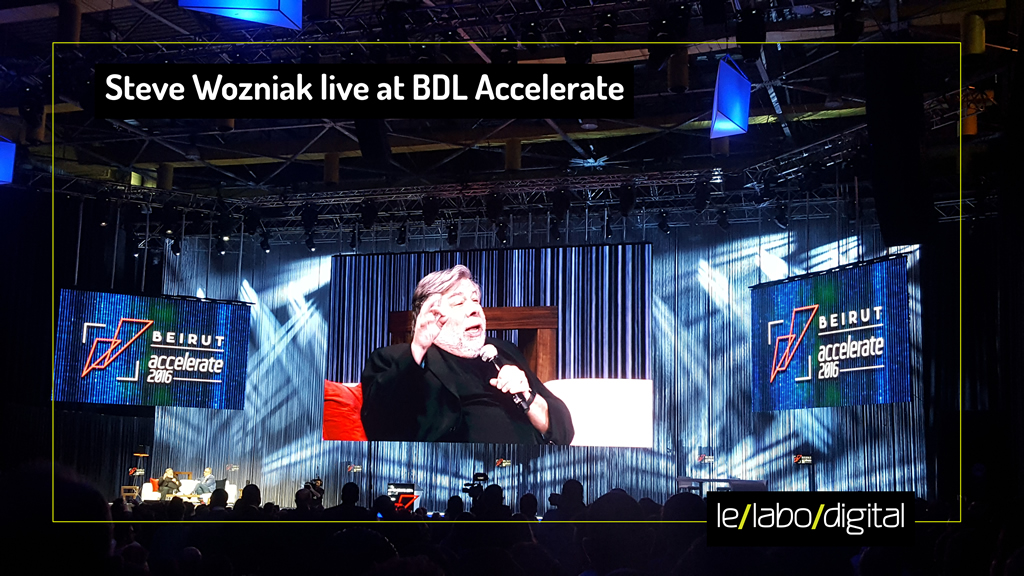 Stephen Gary “Steve” Wozniak, nicknamed “Woz”, is an American electronics engineer and the co-founder of Apple along with Steve Jobs and Ronald Wayne. In 1976, his love of transistors lead him to develop the Apple I computer which was the computer that launched Apple Inc. Watching Steve Wozniak live in one of the biggest events on the Mediterranean and in MENA was a memorable experience for all tech entrepreneurs, engineers, and innovators. BDL Accelerate 2016, the event organized by Banque du Liban – The Central Bank of Lebanon, is an innovation and startup conference for everyone to learn, engage, be inspired, and connect with industry experts, investors, like minded individuals and change makers from around the world.

Wozniak, the main speaker at the conference, stated how early on in his career, he had two goals in life: Be a fifth grade teacher and an electrical engineer. He was extremely passionate about designing computers. He used to buy manuals for the newest chips to design computers on paper and had to learn about programming languages and microprocessors from scratch. His passion for designing a computer made him think of tricks and ways to do things differently using fewer chips since he couldn’t afford buying one at a time where computers were only present at military facilities.

During the talk, Steve Wozniak expressed his distrust in Google for making money out of watching what he is doing. Facebook does not interest him. He is bored checking a newsfeed that displays a large number of posts for people he doesn’t even personally know. Steve Wozniak criticized the restriction enforced by Lebanese Internet service providers on downloading some apps: “Why would you do this! Come on, this is the Internet!”

Wozniak’s passion for technology and inventing stuff to make life easier is endless. He mentioned that when he started working, he thought that we humans can work four days per week instead of five if we build things that can achieve tasks for us. When asked about whether Apple is working on the software part for autonomous vehicles, Steve Wozniak said it is a rumor. However, he would love to see electrical cars with long life batteries and rechargeable stations. Anything that is safe and can serve our needs is welcomed. If the car is safer, insurance will become cheaper. On the race to space, Steve Wozniak said this doesn’t intrigue him totally. Still, when a man will walk on Mars, he wants to be able to put a virtual reality headset and experiment this moment.